"For the first time,
I can now feel myself
having a future."

"This is home." It’s a phrase we use when a place becomes a home. When our surroundings feel safe and allow us to rest in security. When we feel a deep sense of acceptance and belonging from those around us. When we have the opportunity to pursue our dreams and the life we want to create. It is the place where hope is born. It is where we feel free.

For millions of people in the world today, the experience of home is threatened or destroyed by modern-day slavery. And this must change.

Once survivors of human trafficking enter into our care, home can look different depending on their life circumstances. Wherever a survivor is at on their journey, our aftercare team is committed to helping them find home. Our goal is for every survivor to experience an environment where they feel acceptance, belonging, safety, and opportunity. And we won’t stop until they truly can say, "This is home." No matter what it takes. No matter what it looks like.

Read these stories of home, and
See the difference you can make in the life of a survivor this Christmas. 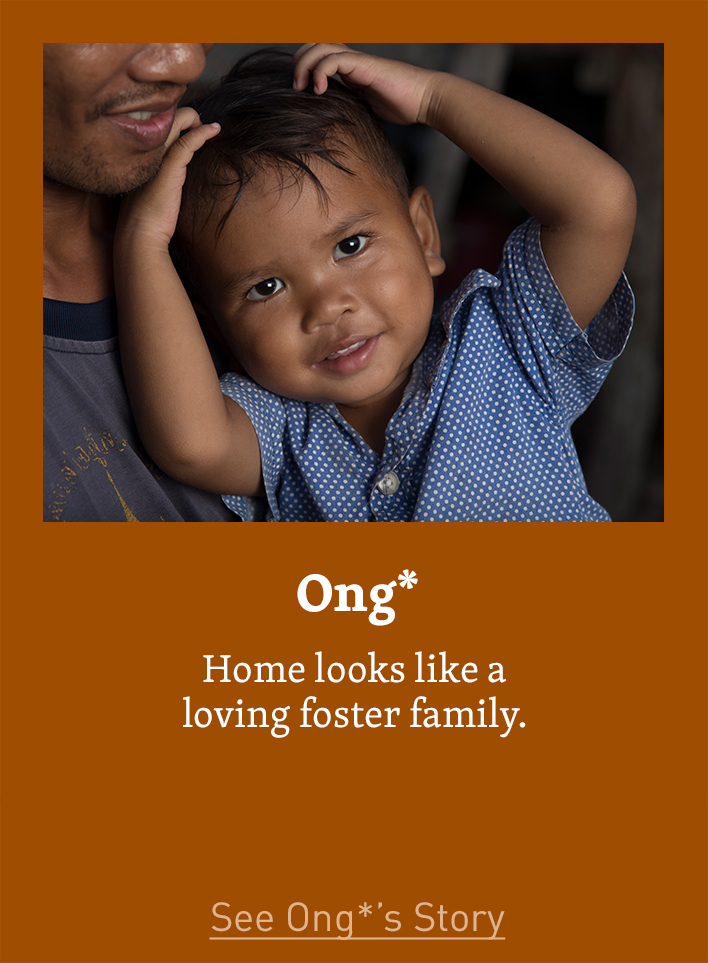 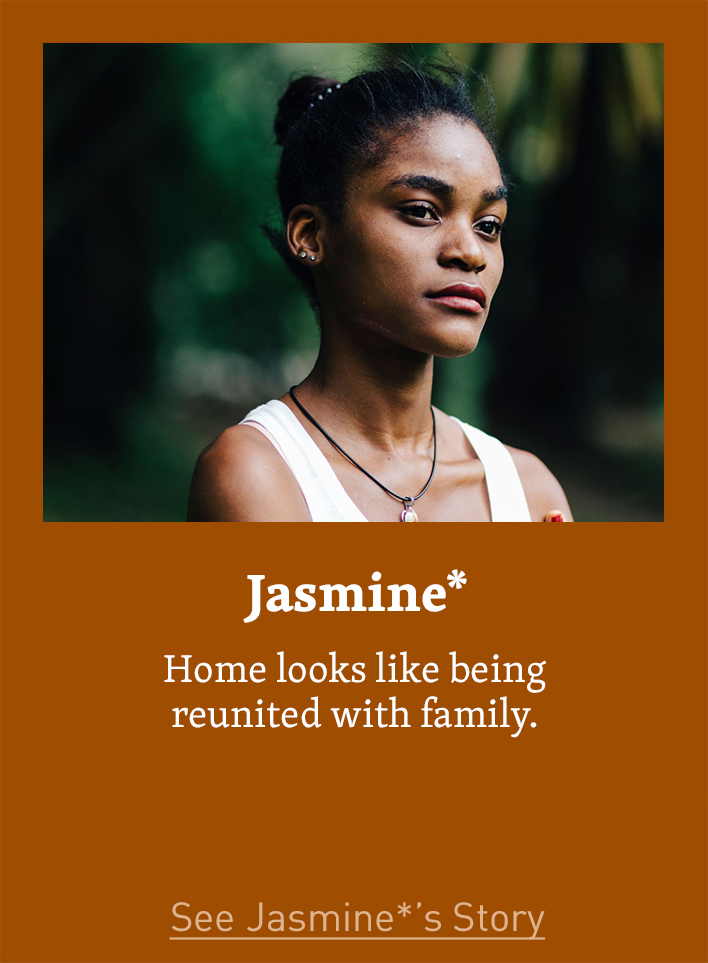 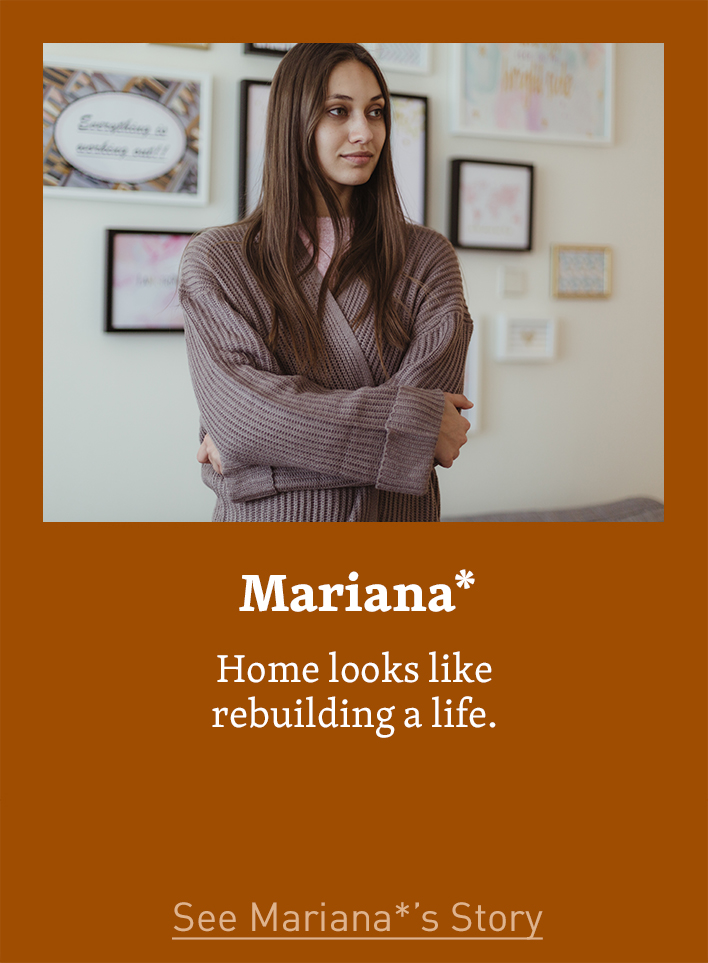 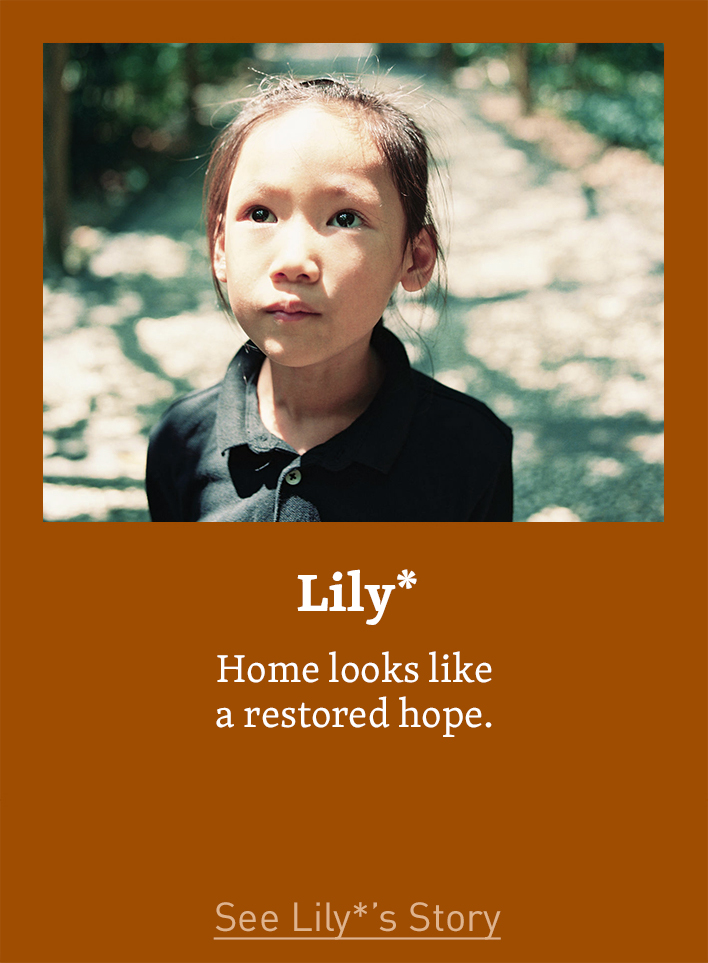 For Jasmine*, what seemed like a new opportunity turned out to be abuse and exploitation.

Jasmine was 16 years old when she was encouraged to leave her rural hometown in pursuit of better opportunities in Johannesburg. Everything was fresh and exciting, and it wasn’t long before she met a charming guy at a club who she quickly grew to like and trust. He was from Cape Town and shared amazing stories with her about the opportunities and jobs in the city. He convinced her to go and visit him, and bought her a bus ticket.

Once she arrived, he took her to a house where she thought they would be staying, but when they arrived, she was locked inside. She saw other men and women who appeared to live in the house, and was told by her captor that she needed to shower and get cleaned up so that he could take her out.

After showering, he drove her to a different part of town and ordered her to get out of the car. It was there that he began to sell her for sex. He used fear, threats, and beatings to control her, and she worked on the streets every night. She was forced to give all of the money that she received to her trafficker.

One evening, after working on the streets for two years, undercover police picked her up and soon after, introduced her to A21. Our aftercare team provided immediate medical care, and then through our S.A.F.E. program, she was repatriated back to her hometown. Jasmine is now free and reunited with her family.

For Jasmine, home looks like being with her family and gaining the skills to start a new life.

For Mariana*, home was a place and a dream that was lost.

Mariana’s beloved Papa had just passed away. She suddenly felt a pressure from her family to provide for them. In need of work, Mariana traveled to Greece with her boyfriend. The first two months in Greece went fine as she took odd jobs here and there and was able to make ends meet.

Day after day, her boyfriend became increasingly abusive. He beat her, blaming her for their poverty and insisted that she do more to provide.

The next day he told her that he’d found her a new job and brought her to a brothel. She cried and pleaded with him not to go in, but the more she cried, the more he beat her. She realized that working in the brothel was the only way to avoid being beaten to death.

As the weeks passed, she became more hopeless, soon believing she could never escape. During her shift one night, she accidentally cried in front of a customer. He asked her softly if she was okay. She replied 'no’. That night, the police conducted an operation in the club, and she was brought into A21’s care.

When Mariana first came to A21, she was convinced that her life was ruined forever. But as the months went by and she spent her time in the A21 Freedom Center, her outlook on life changed. A21 helped her learn Greek, supported her with independent living, assisted her in getting a job interview, and when she was offered a full-time job in a safe location, she was ecstatic. She now works full-time in the hospitality sector. She is flourishing, and within the first month of the job, she had already been promoted.

Through her strength and the support of A21’s Freedom Center, she was able to establish a new life and find home again. Greece is a destination country for human trafficking, and there are many more yet to be identified and assisted. This Christmas, you can give the gift of home for people like Mariana. Your gift can provide new homes that give hope, freedom, and opportunity for dreams to be fulfilled. You can restore lives.

For Ong*, the street was once his reality.

18-month-old Ong had been used for begging since he was born. He was often spotted early mornings and late evenings crying alone on the street with a change bowl—being carried around by other children begging to tourists crossing the border from Cambodia to Thailand. His body was covered in bruises and scratches. Hundreds of people crossing the border would walk past him every day.

After seeing Ong on the street, A21 contacted the police, and worked together with Thai authorities to remove him from his trafficking situation and bring him to safety.

After providing immediate care, A21 was able to find a foster family for Ong in his home country of Cambodia. The parents had always wanted to have a baby, but were unable to. Ong is now in the loving care of a family, who is committed to supporting him for life. Ong is now safe. He is cared for. He is home.

Ong’s is now a part of a new home. A home full of hope, opportunity, freedom, and safety. But there are so many like Ong who are still being exploited on the streets.

For Ong, home looks like a loving foster family. Give today, and be the reason another survivor experiences home.

For Lily*, her life was taken away from her.

Lily grew up in a rural village in the Mekong region. Together with her siblings, Lily was trafficked from her home country to Thailand by her aunt at the age of 7. She had never been to school and was extremely malnourished and abused at the time of trafficking.

Upon arrival in Thailand, her brothers were sold to a fishing boat and before long, she was used for sex by fishermen who were passing through. Her life was not her own. She was forced to service men for 2 years before being identified as a victim of human trafficking.

Shortly after being found, Lily was connected with A21 and brought into our Child Advocacy Center in Pattaya. Her physical and mental trauma was extensive, and our team worked to provide critical care to Lily.

Lily had always wanted to attend school. The A21 team helped her to get enrolled in school. Today, she is learning Thai and taking dance lessons.

$100 could help ensure a survivor in South Africa is safely repatriated home and reunited with her family.
$250 could give Greek language lessons to a 20-year-old survivor in Greece so she can stay there and create a new life for herself.
$500 could help unite a survivor in Thailand with a loving family.

Give today, and be the reason another survivor finds home.

A21 is committed to the journey. Whether it’s ensuring survivors are safely repatriated to their families, finding a loving foster family, or helping them reach a life of independence through the opportunities provided in our Freedom centers—you can join us and be a part of giving the gift of home this Christmas.

*Survivor's names have been changed for their protection.