A brother and a sister, both minors, were smuggled across the border to the United States to work in the agriculture industry. Their parents were told that they would get an education and that their needs would be taken care of if they paid a fee. This was a lie. This family lived in a rural town just south of the US border. Even though they did not live in the best conditions, these children lived happily with their family. One day, their parents were approached by a man who claimed to have secured jobs and educations for other families in similar situations. The parents accepted with hopes of their children having a better life if they were sent to the US. The siblings were smuggled across the border to a farm in the US. Upon arrival, they realized the danger they were in. They were forced to work long hours picking fruit, sexually exploited, living in horrible conditions, and never received the education they were promised. This is labor trafficking and it is illegal and inhumane.

Federal law prohibits anyone from obtaining the labor or services of anyone by force, threats of force, means and threats of harm (including financial), or threat of abuse of legal process. The Trafficking Victims Protection Act makes it unlawful to enslave a person in a condition of compulsory service or labor against his/her will through the use of force, threats of force, threats of legal coercion, or by creating a “climate of fear” by any of these means. It is also a violation of federal law to recruit, harbor, transport, or broker a person for the purpose of labor trafficking. This is in addition to any applicable state law governing labor trafficking. According to Polaris, the number one ethnicity of human trafficking survivors generally in the United States are Latinos. Polaris has also noted that 36% of labor trafficking survivors encountered in the United States were between the ages of 12-17, and 21% were between 18-23 years old when they were first trafficked. Polaris statistics in 2016 showed that agricultural work comprised the second most prevalent form of labor trafficking in the United States. Many individuals, both children and adults from poorer communities abroad are deceived with a false job opportunity in the United States. They often pay recruiters to facilitate travel into the United States at which time they are exploited in the agricultural industry where they are underpaid, if at all. They are threatened both physically and with legal process if they attempt to report the crime.

• Evidence of physical or sexual abuse / visible scars or bruises
• Has few personal possessions/clothes
• Working excessively long hours
• Is unpaid or underpaid
• Unable to leave their work environment
• Have no access to education
• Come from a place known to be a source of trafficking
• Travel in groups with persons who are not relatives
• Live in poor or substandard accommodations
• Live in degraded, unsuitable places, such as in agricultural or industrial buildings
• Have no labor contracts
• Have no choice of where to live
• Depend on their employer for a number of services, including work, transportation, and accommodation
• Evidence that labor laws are being broken including child labor laws
• Guards, high security fences, or other security measures designed to keep them on work premises
• Unable to move freely to the store, to the park, etc.
• Was recruited through false promises concerning the nature and conditions of the work
• Is not allowed breaks or suffers under unusual restrictions at work
• Is fearful, anxious, depressed, submissive, tense, or nervous/paranoid

* The indicators listed here are not exhaustive and represents only a selection of possible indicators. Indicators on this list may not be present in all agricultural trafficking cases but represent only those depicted in this scenario.

* For information on federal laws, please visit our website.

IF YOU SUSPECT IT, REPORT IT.

HUMAN TRAFFICKING IS THE FASTEST GROWING GLOBAL CRIME AFFECTING EVERY CONTINENT AND ECONOMIC STRUCTURE IN THE WORLD. IT IS HAPPENING IN INDUSTRIES THAT WE INTERACT WITH ON A DAILY BASIS.

The purpose of Can You See Me? is to equip the general public to recognize indicators of human trafficking, and report suspected scenarios. An increase in reports will lead to an increase in victim identification.

Can You See Me? exists to bring awareness of the millions of men, women, and children who are currently trapped in slavery across the world. By partnering with law enforcement, governments, businesses, and NGOs, our goal is to turn awareness into action. Click the scenarios above to find out more information and to watch the PSA videos.

Help us spread the word.

To download the Media Kits, please fill out the form below:

Use social media to spread the word. Don't worry, you don't have to download anything. We've equipped you to be able to post directly from your phone. Just hold down your finger on the photo you want to use and save it to your photos folder. Then copy and paste the text directly. You can use the sample captions below, or feel free to write your own.

Thank you for your support of Can You See Me?

1. There are millions of slaves in the world today. I’m standing with @A21 because together, you and I can do something about it. If you suspect it, report it. A21.org/CanYouSeeMe #CanYouSeeMe #A21

2. Modern day slavery still exists. If you suspect it, report it. Learn how through @A21 or visit A21.org/CanYouSeeMe. #CanYouSeeMe #A21

3. I’m partnering with @A21 + #CanYouSeeMe to raise awareness for modern day slavery. Together, we can see an increase in identification, reporting, and rescues. If you suspect it, report it: A21.org/CanYouSeeMe #A21

4. Slavery is still happening in our world today. But you and I actually have the power to change that. @A21 has launched #CanYouSeeMe, a global campaign that equips us to recognize indicators of human trafficking and to report any suspicious. With the steps we take together, we can see slavery abolished in our lifetime. A21.org/CanYouSeeMe #A21

5. #CanYouSeeMe exists to educate and equip the public on what trafficking looks like so that if you suspect it, you can report it. @A21 released a new scenario along side with their partners, @pozodevida @mexicovslatrata @consejociudadanomx and more featuring agricultural labor trafficking in Mexico. Watch the full film at A21.org/canyouseeme #A21 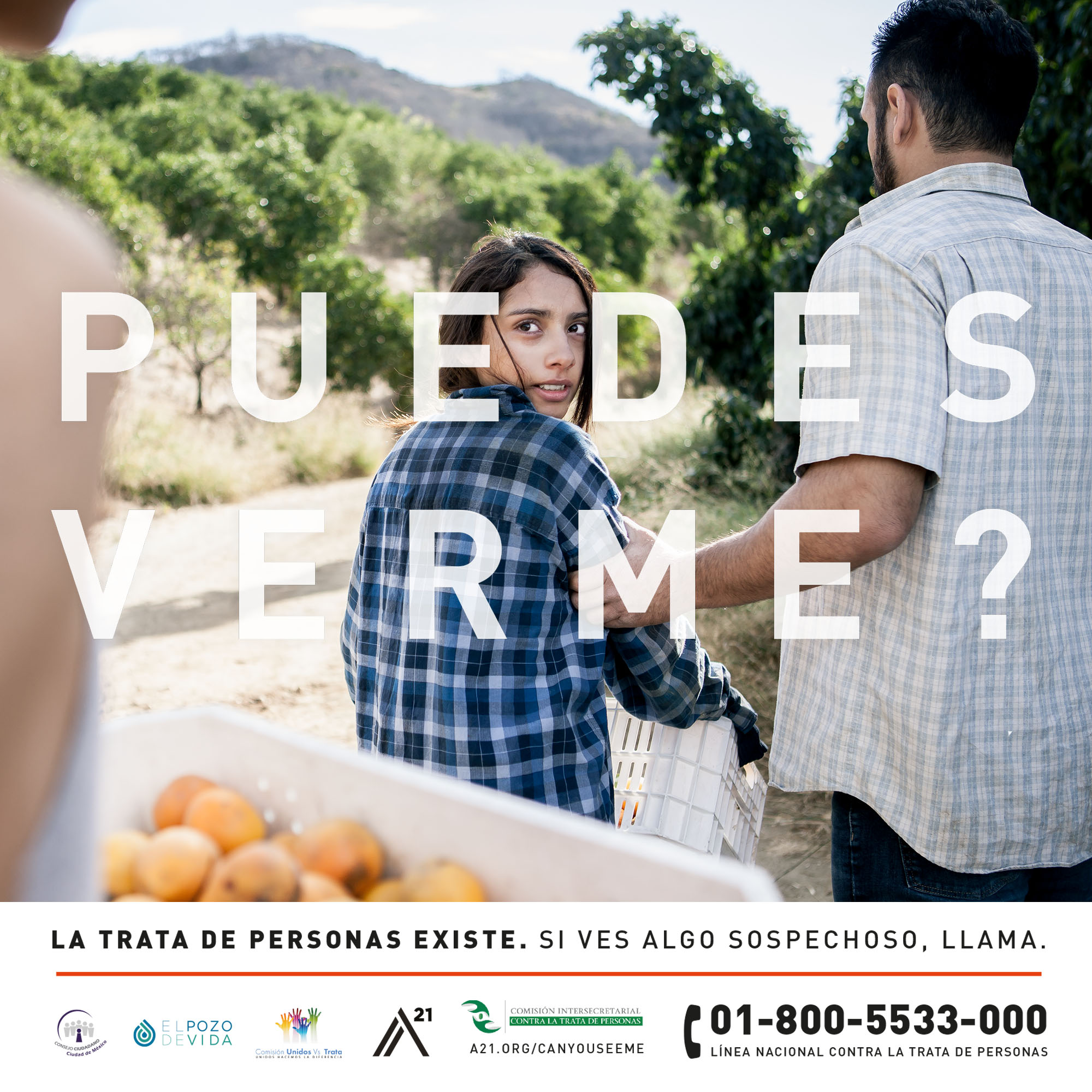 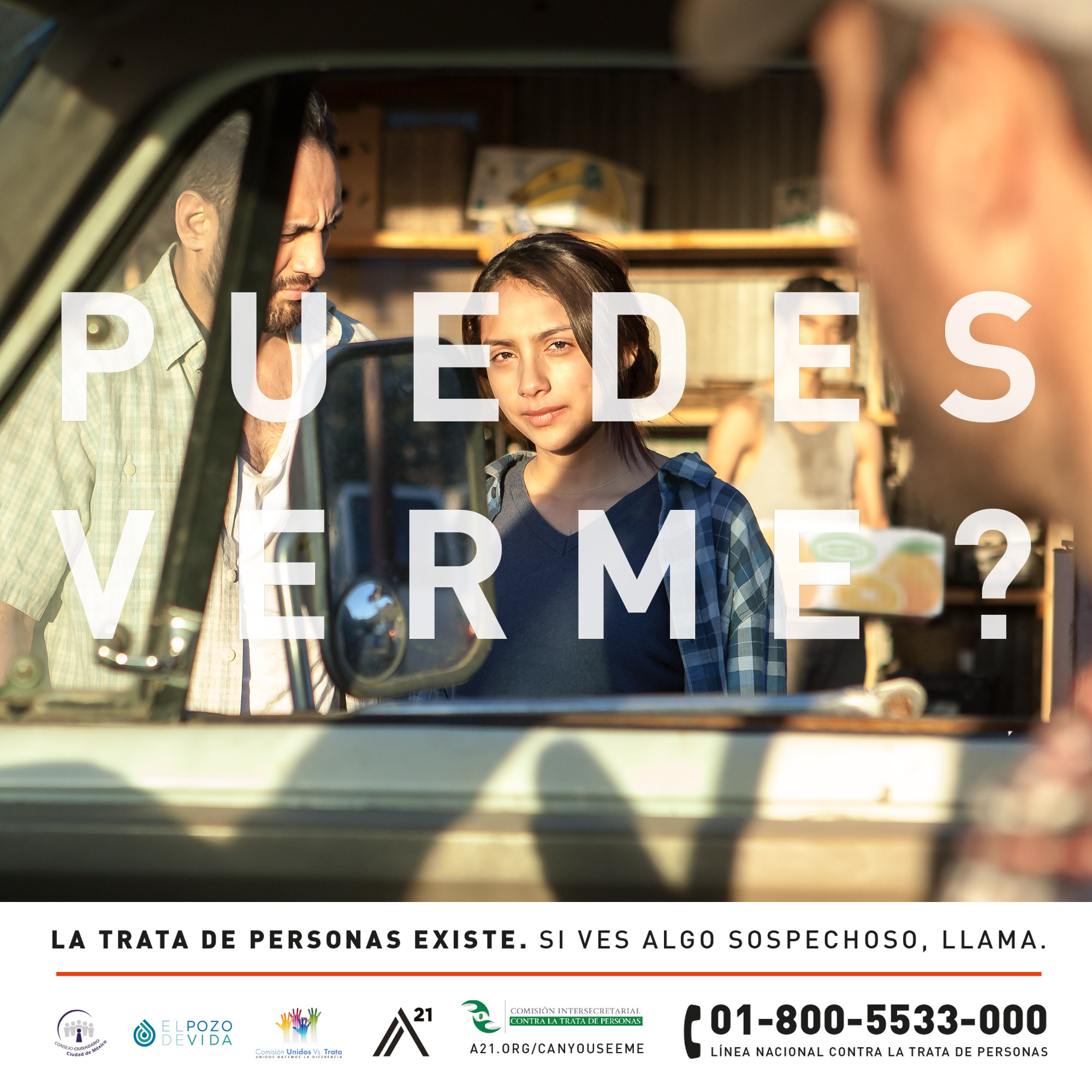 For more information on A21 or human trafficking, visit A21.org or contact us directly.